All the Colours of the Sun (2): Turner and ‘Aerial’ Claude

There is a small room in the National Gallery dedicated to a request made by Turner in his will – that two of his paintings be hung in perpetuity alongside two paintings by Claude Lorrain (1600-1682), a French painter who worked mostly in Italy. Now Turner often ‘took on’ the great masters in a sort of competitive spirit (see Michael Glover’s review “Turner and the Masters: competitive spirit”, the Independent) – to both learn from them, and to take their ideas further. Claude though was a lifelong love and obsession for Turner, who was awed by the 17th-century painter. Indeed, there is a story that Turner, as a young man, cried when he first saw a Claude painting – for its beauty, and for thinking that he, Turner, would never be able to paint like that.

Of course Turner would paint like Claude: he would absorb the master’s methods and drive them yet further. and what fascinated him above all else was Claude’s painting of light.

“The Mill” aka “The Marriage of Isaak and Rebekah” (1648) takes a story from the Book of Genesis, transporting it to an idyllic Italian scene: the marriage revelry plays out in the foreground as the serpentine river leads the eye beyond town and mountain into the far distance of the horizon.

The freshness of the sky is extraordinary, one can sense the bright airiness.

One 19th-century art historian, Michael Bryan, wrote that “Claude soars above the servile representation of ordinary nature and transports his spectators into the regions of poetry and enchantment.” Others noted Claude’s brilliancy in depicting an almost visible atmosphere. Turner himself called the artist “aerial Claude”.

And what is so strange about the painting is that if one catches it just out of the corner of one’s eye, what stands out is not the ‘story’ of the marriage scene, but the sky itself: it seems to hang like a pocket of light – something I can only suggest here by means of draining out the colour… 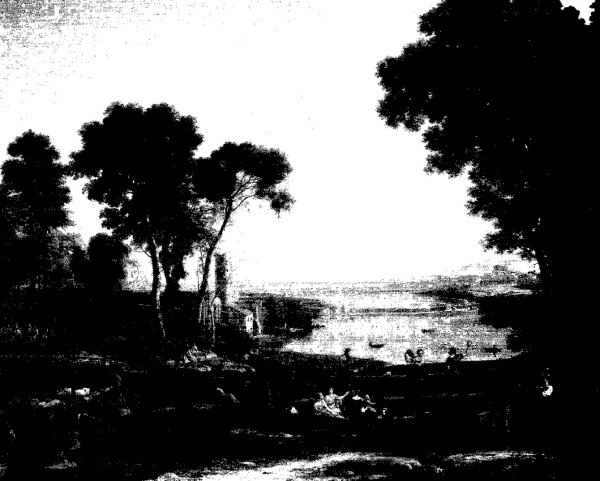 It’s due to the way in which Claude constructs the picture: the trees don’t frame the sky as such, but force us to distinguish foreground and background, squashing the middle space so that the light is primarily in the distance. This catches the eye: we explore sky, horizon and the river, only then coming to the foreground and that patch of light immediately in front of us.

If we look at the second painting by Claude that hangs in the Bequest, we’ll see this even more clearly.

(It’s worth noting the short introductory film on the National Gallery website: here)

The painting depicts the Queen of Sheba as she sets off to visit King Solomon of Jerusalem; the vessels are loaded with luggage and gifts as the early morning sun lights up the city of Carthage. The Queen is on the steps to the right.

And if we again take out the colour, we can see that ‘pocket’ of light. As with the trees previously, here the buildings hold up the sky and note how the reflection of the light on the water leads the eye in a line down the centre of the picture to the foreground.

Most important though is that, in this painting, Claude has put – right at its very centre – the sun itself. It’s something Turner would also do from very early in his career. It means the rest of the painting – the colours and the shadows – is driven by luminosity.

The story itself is taken from Virgil’s “Aeneid”: the struggle for power between the two cities of Carthage and Rome during the Punic Wars (indeed this history subject might screen the contemporary struggle of Britain and Napoleonic France). The figure in blue and white on the bank to the left is Dido as she directs the architects and builders. The figure in armour might be her lover Aeneus. The children playing with a toy boat could symbolise the fragile but growing naval power of Carthage. Meanwhile, on the opposite bank stands the tomb of Dido’s murdered husband – foreshadowing future events.

But here, the rising sun marks this as the image of the dawning of a new empire.

Not that the painting didn’t have its critics, due in particular to Turner’s use of colour, the contrasting yellow and blue of the sky was deemed excessive and “far from nature”. The critics never did ‘get’ Turner’s love of colour (to which we’ll return).

The sun is also at the heart of the second Turner painting that hangs alongside the Claudes: 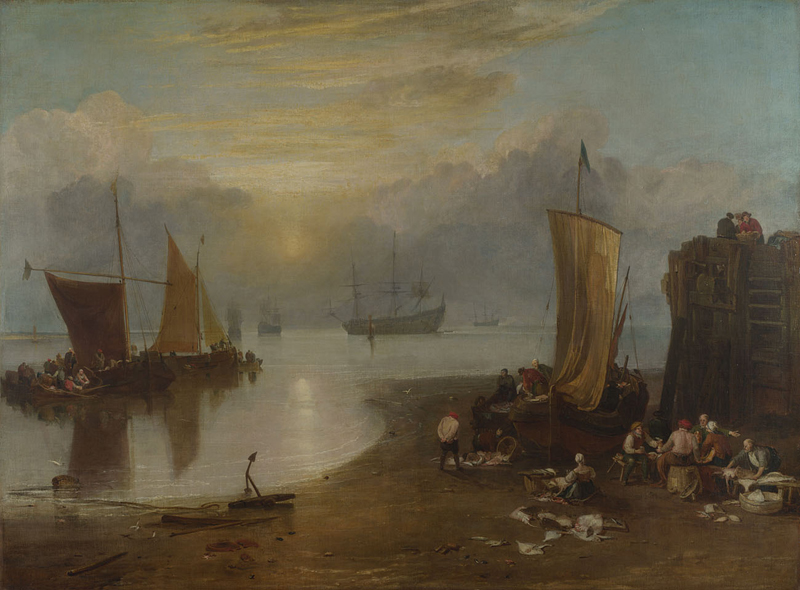 It’s a very different painting; inspired, one feels, more by Dutch art than Claude. Yet, again, Turner takes the Claudian construction even to this scene of boats on a river and the fishermen on the sands: the sun is central and its light sweeps across the water down to the foreground.

The classic ‘old master’ has been made modern in this mundane everyday scene not of nymphs dancing or queens overseeing, but fishermen at rest.

And it is perhaps to show himself as ‘the modern Claude’ that Turner decided this picture would hang as part of the Bequest instead of the one he’d originally suggested, and which is now at the Tate:

This is “The Decline of the Carthaginian Empire” (1817; Tate)

and it has the most remarkable subtitle:

The Decline of the Carthaginian Empire-Rome being determined on the Overthrow of her Hated Rival, demanded from her such Terms as might either force her into War, or ruin her by Compliance: the Enervated Carthaginians, in their Anxiety for Peace, consented to give up even their Arms and their Children

It’s a brighter painting than Dido building Carthage, and much more dramatic: there is a chaos of armaments in the foreground, a woman weeps on the steps, and a snake is hidden coiled in the flowers on the left.

But note the construction, the light… 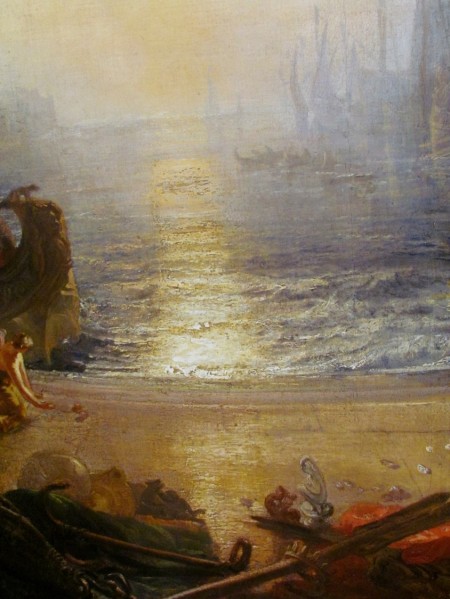 The sun here is absolutely solid – like a milk bottle top stuck on.

The Tate notes that in the exhibition catalogue, Turner penned a poem which included the lines:

To investigate the sun in Turner’s work is the investigation of light, colour and texture; and it’s full of meaning.

Next time we’ll look at some of Turner’s landscapes and his ‘translation’ of Claude’s Italian idylls to the British scene.

But, as a postscript, I just want to glance at another of Turner’s paintings (one of my absolute favourites) in the National Gallery collection:

Taken from Alexander Pope’s translation of Homer, this is much more than an illustration to a scene from the Odyssey. This is an essay on light and colour. See the sun – like a lighthouse – on the horizon, it’s rays reaching up into a sky of thickly painted colours whilst the sun itself is white with heat and light. 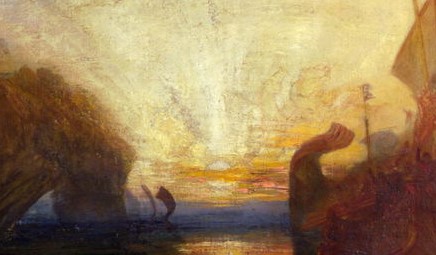 But for now, could it be that the disc of the sun there on the horizon forms the wheel of the sun god Apollo’s chariot? If we look up a little and just to the right of it, are they the heads and manes of horses rearing up as they draw the chariot across the sky, thus bringing in the new day?

All the Colours of the Sun (2)

If you are enjoying this little series and are able to ‘donate’ – please do! Many thanks and all best wishes.

Posted in All The Colours of the Sun: JMW Turner