Notes that spring from

Duncan Grant’s “Bathers by the Pond” (1920-1) from the Pallant House Gallery collection.

Vanessa Bell moved to Charleston Farmhouse, escaping London during WW1, bringing with her the complicated friendships, family & children of the Bloomsbury Group and a visual aesthetic that continues to entrance and resonate a century on. Part of the reason for her move was so that the young men of Bloomsbury who were pacifists and conscientious objectors – including her by then lover and companion Duncan Grant – might find farm work nearby whilst also having the time to paint.

“…the bodies of beautiful young men are open to the world and gleaming in the sun” (catalogue, p.21)

The man in the foreground is astonishing; his beauty is in the curvaceous line that flows from his foot through to his elbows and loops back around to sculpt the body of rich golden colour tones.

It exemplifies the Bloomsbury style and aesthetic: line and colour are sculptural and decorative. Both Duncan Grant and Vanessa Bell were able to paint bodies that were vital, vibrant with rhythm – here is Bell’s “Nude with Poppies” (1916; Swindon Museum; image c/o ArtUk).

Ducan Grant’s painting of bathers echoes Georges Seurat’s “Bathers at Asnieres” (1884; National Gallery, London) – from the concept of the scene to the pointillism of grass and water. And note the little dog in each.

Men had been made into machines (CRW Nevinson: La Mitrailleuse [1915; Tate]).

The Great War had killed, maimed and destroyed millions of young men’s bodies across Europe; a tragedy that would haunt society and its people for years to come. Still, Grant’s painting presents us with these beautiful young men naked and stretched in the sunshine, apparently without a care in the world.

Surely he cannot be ignoring what has happened can he? How could so much death and madness be forgotten?

It isn’t, I would argue. Grant’s gaze re-evaluates men’s bodies: he shows us strong, self-assured, virile, taut and tanned masculinity, but these men are not warriors-in-training, they are simply themselves; happy in their skins. And see how inter-related they are. Whilst Seurat’s figures are all individual and isolated (and Nevinson’s are boxed into tight compartments); Grant’s are connected, overlapping, in-communication, in touch.

It seems to be a call for beauty, freedom and new social relations..

If Duncan Grant is seeking a vision of men’s bodies outside or beyond the narrative of war-masculinity that had been so dominant for a decade, then he is also rebelling against – rejecting – the cultural mainstream with his homoerotic gaze (and it would be another half-century of course until homosexuality was decriminalised).

It’s an extraordinary painting that deploys all the decorative qualities of post-Impressionism to suggest a radically queer new way of looking.

With the developing focus on realist portrayals of working life and an increasing interest in the representation of light, we move this month up the coast to colonies including Walberswick and Staithes, where life in the 1890s is one of harsh beauty. Here we meet Laura Knight at the start of her artistic journey from dark Dutch interiors to the seaside and sunlight.

Tickets for each session cost £10 and include tea/coffee (biscuits!) and resource materials for independent research.

For further information and to enrol, please contact Mark Banting:

In the introductory notes, I suggested a few ideas that might guide the way we think about artists on the coasts in the late 19th century: from the naval story of Britain through to geological sciences the fashions for tourism. Alongside French art and artists influenced their British counterparts: from Millet and the Barbizon School’s investigation of ‘rural realism’ to Jules Bastien-Lepage’s painting techniques.

Back in Britain, we might note the artist James Clarke Hook (1819-1907) who, from the mid-1850s began working in Clovelly on the north Devon coast and introduced a generation of artists and viewers to “coastal topography and atmospherics” –

“Fishing, unloading catches, mending boats, nets and lobster cages became rich sources of subject matter, upon which grander themes, to do with the family, social cohesion in coastal communities, primitive religion and superstition… could be written” (Kenneth McConkey in “Painting at the Edge” pp.11). 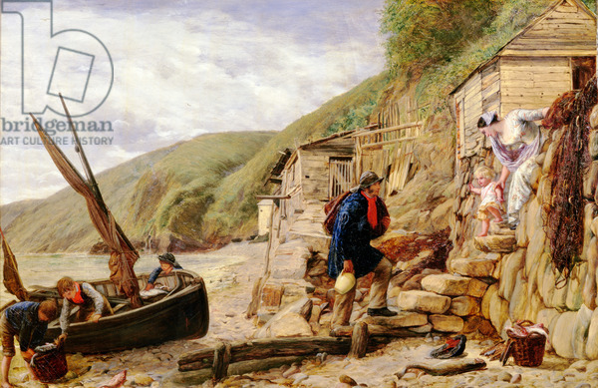 James Clarke Hooke’s “Welcome, Bonny Boat!” – the Fisherman’s Return, Clovelly, North Devon (1856; Harris Museum, Preston) shows, in these earlier works, how indebted he remained to the Pre-Raphaelite style and palette – those high colours and the woman on the steps looking positively Arthurian. It also taps into the Victorian love of narrative and sentimentality – the hint of tragedy that the fisherman may not have returned from his fishing-trip, the relief of his homecoming and the cute joy of the welcoming child.

Crabbers (1876, Manchester Art Galleries) is somewhat different with its rather more invigorating realism: the swell of the sea and the force of the spray are palpable; we are ‘in’ the boat with the working-men up close and personal; and although ‘posed’ these are portraits of real men.

As Kenneth McConkey points out, Clovely became a sort-of artists colony as a number of artists did follow him. But it is Newlyn that becomes the first ‘real’ artists colony.

One of the earliest arrivals was Walter Langley (1852-1922) – a watercolour (primarily) artist from Birmingham who took to the subjects of the fishing village and its often precarious life. Langley’s most famous work is:

Among the Missing (1884, Penlee House Gallery). Again, this taps into the Victorian desire for drama and a certain fatalistic melancholy, yet the scene also conveys the very real horrors of the fishing community. The men would go out many miles to sea for days at a time. Here, Langley shows the village Post Office – a telegram has been pasted onto the noticeboard to inform the villagers that one of the fishing fleet has been lost, naming the boat and the men.

The title of this painting comes from a passage by John Ruskin, which affirms that Christ is at the helm of every boat. The kneeling woman, comforted by her mother-in-law, realises that her husband is lost at sea, but the open Bible, altar-like table and print on the wall hint at the consolations of religion – http://www.tate.org.uk/art/artworks/bramley-a-hopeless-dawn-n01627

It is perhaps the work of Stanhope Forbes (1857-1947) that really brought Newlyn to the attention of the viewing public with Fish Sale on a Cornish Beach (1885; Plymouth Museums):

This extraordinary painting combines the realism of James Clarke Hook with the open-air vitality of Jules Bastien Lepage. It took about 6 months to paint, the artist out in all weathers to achieve his effect. The group at the foreground are apparently discussing the catch and prices, focused and intense, with the fish displayed around their feet. In the middle ground we see the rest of the community to the right and a brilliantly sky-mirroring area of lying seawater – the line of people and reflective water demarcating the margin of beach and sea. Then the eye is led – via the figures and rowing boat – to the cluster of fishing boats on the horizon. The painting is powerfully designed for the viewer’s eye to cross the horizontals and enter the distances and depths of the scene.

And whilst Stanhope Forbes was apparently none-too-enamoured about the work of James Whistler, there are echoes – from the bands of colour, light and subject that stabilise the design to the perfect tones of greys, blues and browns that give the painting wholeness. Whilst Whistler aimed for a decorative beauty however, Forbes is keen to capture the realism of the event and indeed the naturalism of the slowly lightening day, the still-grey sands and the cool blue-grey sea.

Often forgotten is Elizabeth Forbes (1859-1912; nee Armstrong), a Canadian-born artist who became Stanhope’s wife – together they would open the Newlyn Art School in 1899. Her paintings also bring this sense of open-air realism, drawing on the style of Bastien Lepage whilst portraying scenes from the local everyday community:

April (no date; Wikipedia Commons). Again, notice the forefronted portrait against a looser ‘square-brush’ background which gives that sense of open air, freshness and movement.

Such a realist approach to painting became the hallmark of the Newlyn Colony through the 1880 and 1890s, and similar influences were developing in artist communities around the coasts of Britain.

Our next meeting is

With the developing focus on realist portrayals of working life and an increasing interest in the representation of light, we move this month up the coast to colonies including Walberswick and Staithes, where life in the 1890s is one of harsh beauty. Here we meet Laura Knight at the start of her artistic journey from dark Dutch interiors to the seaside and sunlight.

Tickets for each session cost £10 and include tea/coffee (biscuits!) and resource materials for independent research.

For further information and to enrol, please contact Mark Banting: