All the Colours of the Sun (3): Staycations with JMW Turner

On and around the beginning of the 19th century, Britain was ‘in lockdown’ and travel to continental Europe – including Italy, that destination for any serious artist or collector – impossible due to the Napoleonic Wars. Yet, if Turner couldn’t go to visit the land of Claude, then he would bring the spirit of Claude to the British landscape.

In turn he would raise the appreciation of landscape – deemed low on Joshua Reynolds’ hierarchy of art, indeed Henry Fuseli called it mere ‘mapwork’ – to radical new heights. Art historian Kathleen Nicolson says that Turner’s adherence to Claude was in fact due to his desire to “raise the affective power of landscape painting [and] to give the portrayal of nature the same power to move the heart and mind expected of the depiction of significant human actions in History Painting.” 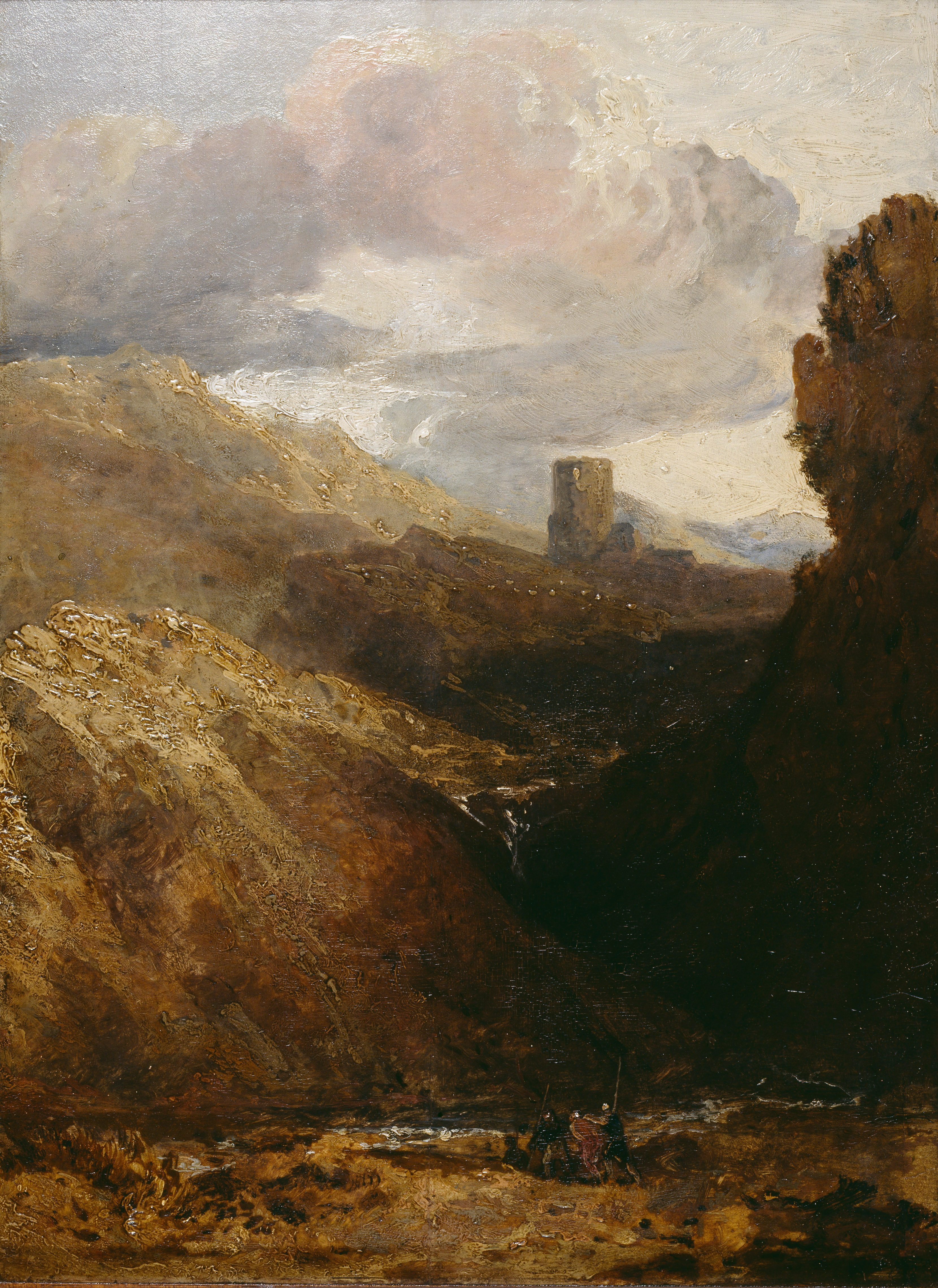 “Dolbadern Castle” is perhaps one of the most outstanding early examples of giving historical power to landscape painting, turning a ‘simple view’ into a picture resonant with allusion and potential meaning. And we have to look – as always – at the detail in Turner’s paint for, small in the foreground, is a group of three men. Tiny as they are, there is a sense of violence: the man in the middle (wearing red) seems to be being forced to his knees, his arms tied behind his back; the other two are in armour, one seemingly pointing up towards the castle. And as we, the viewers, look upwards past the dark looming rocks we too see the castle – full of majesty and power, silhouetted against the infusion of sunlight coming through the rolling clouds.

Turner’s reference here is to Owain Goch who was imprisoned in the castle from 1254-1277 by his brother Llewellyn and only released after Edward I had defeated Llewellyn and enforced English rule over Wales. This of course contains a great irony: Owain gains his freedom as Wales loses it.

The landscape then has become resonant with history and drama; the light through the clouds has become significant – but whether this is the dawn of hope or the sunset of liberty, we don’t know.

A quite different painting. The morning sun rises over the waking town in a glorious glow of light that shimmers from white out into ever stronger colouring. The composition is essentially Claudian (that shimmer of water down to the frame) and again this is more than ‘just a scene’, for Turner introduces the element of time: from the ruins of an historical castle up on the hill in the background to the modern town in the bay; in the foreground boys catch crabs and women lay out washing to dry on the rocks – as they have, perhaps, for centuries; and on the water’s edge, cargo is being transferred from boats onto carts whilst further along a bathing-machine is pulled into the water – the ancient work of the fishermen paralleled with the new tourist industry.

Past and present are combined in this picture of Scarborough as they are – in a different way – here:

Here the British countryside morphs with the Claudian ideal – an ‘elevated pastoral’ – for as idyllic and Roman-esque as this may seem, it is actually Devon. Although not quite geographically accurate (Turner has combined different viewpoints), we see the river Tamar and Gunnislake Bridge. The foreground though, the woman and the dog, is romantically ‘fictional’.

It would seem, in itself, a slight painting – there’s none of the drama of Dolbadern Castle, nor indeed the intertwining of past and present as on Scarborough sands. Yet this painting is full of meaning and symbolic importance – only it comes not ‘within’ the picture, but in the timing of its exhibition and the way it is seen by the viewer. As Tate notes:

This painting was exhibited in the year of the battle of Waterloo.

It would have been hard to avoid the patriotic subtext of such a grandly ambitious depiction of the national landscape.

This shows the growing importance of the landscape as a symbol of Britain; no longer ‘mere mapwork’, landscape painting has become entwined with the national – political, military – discourses of society.

“We” – the common viewers of the day – looked at and saw the landscape quite differently to, say, twenty years earlier. At least some of us did. Sir George Beaumont described Turner’s painting as “all peagreen insipidy” (Tate). And, more generally, we can never forget that William Blake thought landscape nothing but a “vegetable curtain” put up by the Devil.

Let us look at one more of Turner’s lockdown ‘British’ landscapes:

Snow Storm: Hannibal and his Army Crossing the Alps exhibited 1812 Joseph Mallord William Turner 1775-1851 Accepted by the nation as part of the Turner Bequest 1856 http://www.tate.org.uk/art/work/N00490

British? Well, yes. For this ‘historical’, indeed ‘military’ painting actually started off as a sketch of a thunderstorm in Yorkshire!

And in contrast to any Claudian framing of space and distance, Turner has deployed a vortex, a great roller wave of cloud ploughing across and making the sky hugely dramatic as sunlight and thunder contrast and clash with each other. This sky is no backdrop, it is part and parcel of the picture’s drama and meaning. Reduced to the lower right of the picture we have the Carthaginian army struggling through the Alps with this furious snowstorm approaching whilst to the left Swiss tribesmen are attacking the soldiers – all of which is miniscule in comparison with Nature. Not that we should miss these details – indeed when it was exhibited at the Royal Academy, Turner insisted it be hung ‘below the line’ so that it was at the level of the viewer – adding indeed to the theatricality of the painting as the viewer feels close, almost part of, the scene.

And it is only by looking at the detail that we even hope to see Hannibal:

In his biography of Turner, James Hamilton notes how important this painting is – as Turner parallels the ancient war of Hannibal and Carthage against Rome in the Punic Wars with contemporary events, that is the long war between the British and the French. The moment depicted in the painting is when Hannibal rallies his troops, urging them to follow him out of the storm and on to military victory. When the picture was exhibited, Wellington’s army is regaining land and beginning to push Napoleon out of Spain.

The elements of landscape painting in “Hannibal and his Army Crossing the Alps” – in particular sky, clouds and sunlight – are combined with history and literature as well as Britain’s contemporary socio-political situation. It’s an extraordinary painting. Turner has taken all Claude’s ideas and pushed them as far as he can: twisting the geometry and the sunlight, and collapsing the historical allusion of Hannibal on his elephant with a storm over Yorkshire to create one of his most intense and dramatic pictures.

Next week we will pick up the theme of the sun in Turner’s paintings.

In the meantime, note his most peculiar depiction of the sun in the “Hannibal…” painting: 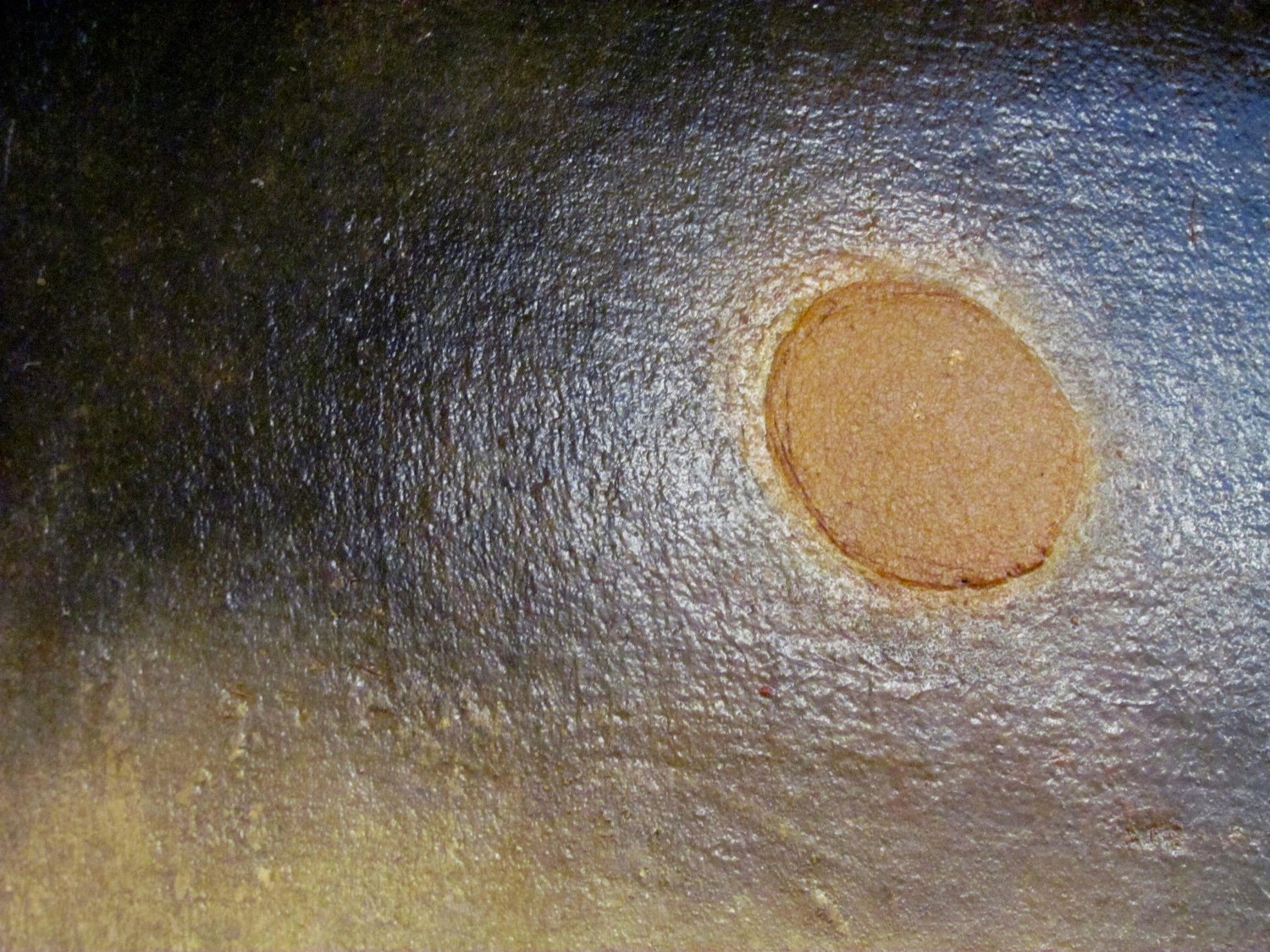 All The Colours of the Sun (3)

If you are enjoying this little series and are able to ‘donate’ – please do! Many thanks and all best wishes.

Posted in All The Colours of the Sun: JMW Turner