“All The Colours of the Sun” – Exploring the Art of JMW Turner (1): Introduction 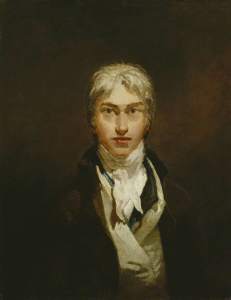 This self-portrait appears to date from around 1799 when Turner was about twenty-four years old. It was possibly intended to mark an important moment in his career, his election as an Associate of the Royal Academy – Tate.

On a little diversion from our “Rambling with Rothenstein” project, I thought we might look – in some depth – at the work of one of the most internationally famous artists, Joseph Mallord William Turner.

One of the great joys of Turner is that he painted so much: from pastorals to history painting to seascapes. Nothing it seems evaded Turner’s eyes or brush – whether it was an old Biblical scene or modern Victorian industrialisation; the landscapes of Britain or the canals of Venice.

And so, to prevent us rambling too far afield, “All the Colours of the Sun” is a 6-week exploration of sunlight and colour:

As an introduction then, I want first to discuss the painting that inspired this research: 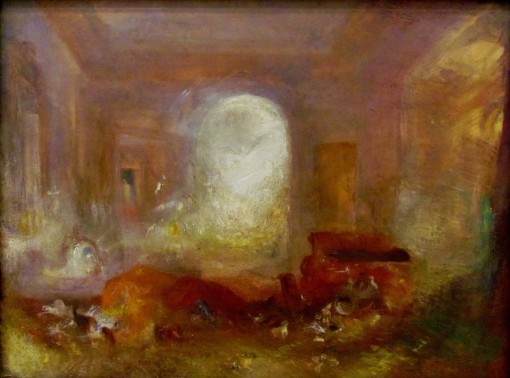 Painted in or around 1830 and now at the Tate, we can see that it is clearly an unfinished painting. Indeed art historians are not even sure of its subject matter or where it was painted. The Tate‘s title for it is “Interior of a Great House: The Drawing Room, East Cowes Castle” (East Cowes Castle being the Isle of Wight home of Turner’s friend, the architect John Nash), but it seems to have been re-worked over the years and may have been the beginnings of a picture to be called “The Sack of a Great House” (hence all the jumble in the foreground).

I find it one of the most beautiful of Turner’s canvases despite – or because of – its unfinished state and unknown story.

Moreover, I think it suggests what made Turner’s vision so unique.

Turner was a genius painter; no one quite compares to his style or fluency. A Cockney Londoner born in the back streets of Covent Garden, he was elected as Royal Academician in 1802 at the age of just 26.

Despite his genius, Turner did have his critics. Indeed by the end of his life he was seen as positively mad – his paintings had gone off the scale of the Academy’s expectations, one critic declaring: “He delights in abstractions that go back to the first chaos of the world” (quoted in James Hamilton) – which is a very apt description when it comes to the “Interior of a Great House”. 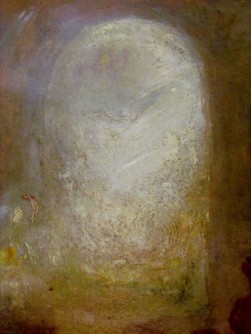 And there are some very interesting notes in this painting: the emerald green and the bright red vermilion are astonishing contrasts. The emerald green was only newly available, and much stronger than mixes of blue and yellow.

Then there’s that dazzling light through the window.

If we look in close, we see that it’s created using palette knife, brush, the ‘wrong’ end of the brush and indeed scratches from Turner’s thumb nail, which he kept long especially for such purposes. He revelled in getting his fingers and hands ‘dirty’ with paint. And note how the light blue contrasts with the yellows, giving a kind of shimmer – this would have been much more intense when he painted it, for the blue has muted with age.

The colours, the textures – they’re all so exhilarating to the eyes, all in motion; like the chemicals and gases that exploded with the Big Bang in the formation of the universe, that “first chaos”. And that might be one of the best ways to think about this painting – perhaps even most of Turner’s mature paintings – as the explosion of gases that would make the solid matter of the world. 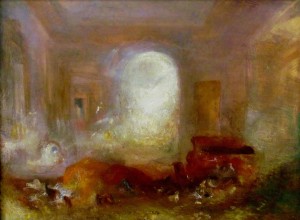 “a brilliant light dissolves the scene into its colour constituents and spills like debris on the floor of the room”.

It’s a glorious description, but I want to change that verb from “dissolves” to a more positive force –

a brilliant light creates a scene of colour, shaping every corner of the room

– because rather than seeing this as a picture of a room with light streaming through the window, we could look at it the other way around and see it as a painting of light and how it makes the room visible by illuminating the space and wrapping everything in colour and shadow.

Whichever way, it is this investigation of light that, it seems to me, underpins much Turner’s work and gives his paintings such power.

And it is with this aim – the (re)presentation of sunlight – that Turner looked to the 17th-century paintings of Claude Lorrain as we’ll see in part two.

Before we leave the Isle of Wight (and as a taster for Claude’s influence) though, have a look at Turner’s (1827)

“Sketch for ‘East Cowes Castle, the Regatta Starting for Their Moorings’ No. 2” 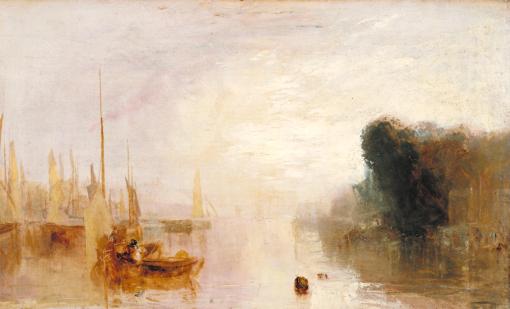 which was possibly painted on the spot, Turner sitting aboard a boat (see Tate website).

Right at the heart of the picture is an intense, brilliant, illuminating (sun)light painted with slabs of thick white paint.

There are of course numerous books on Turner’s life and art, but I find “Turner: A Life” by James Hamilton [Sceptre, 1997] one of the best in terms of insightful detail and a ‘good read’.