A History of Art in England (12): Passions in Miniature

In An Introduction to English Painting, John Rothenstein actually had very little to say about Elizabethan art & visual culture, indeed he was quite dismissive: “her Court painters became primarily painters of fashion”. However, he does admit that “No English portraits of the age are equal in accomplishment or grasp of character to those of the miniaturist Nicholas Hilliard (1547-1619). His art was closely linked with that of the English mediaeval illuminators, but Holbein was his master.”

Hilliard certainly looked to Holbein, but we mustn’t forget that Hilliard’s ‘mistress’ when it came to limning, the painting of miniatures, may well have been (according to Roy Strong) Levina Teerlinc (1510s – 23 June 1576).

Teerlinc reminds us that many artists of the royal court came from Europe, in particular the Netherlands. She was from an artistic family and trained in manuscript illumination. She came to England in 1546 and worked at the courts of Henry VIII (she was paid more than Holbein!), Edward VI, Mary I and it would have been under Elizabeth that Teerlinc taught the goldsmith apprentice Hilliard the art of miniature portraiture: watercolour on vellum, often with the most extraordinary detail.

It was the beginning of a particularly English tradition.

The Victoria and Albert has quite a collection of Hilliard’s work as does the National Portrait Gallery (where there is a short film of Andrew Graham-Dixon discussing the miniatures of Elizabeth).

There is of course something very different about miniatures: their size. The portraits we saw in Rambling (11) would have been hung on walls in prominent rooms, in country house galleries: they were to be seen ‘publicly’ as it were. Miniatures were displayed – in cabinets or even worn at court – yet their size suggests an intimacy in the act of looking; they are held in the hand and regarded closely, perhaps even privately. And they are full of suggestive detail – secret symbols to be decoded by the viewer or the portrayal of feeling and emotion ‘for your eyes only’. 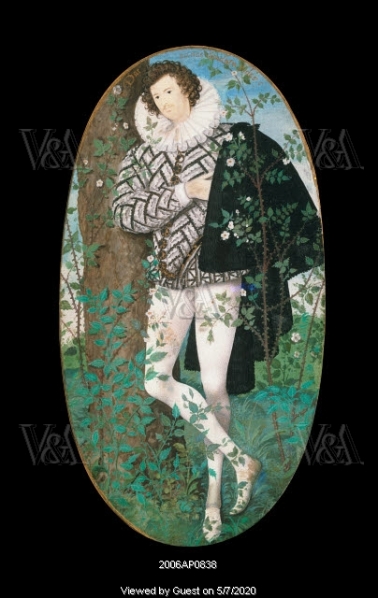 Perhaps one of the most famous miniatures by Hilliard is A Young Man Leaning Against a Tree Amongst Roses at the V&A, thought to represent Robert Deveraux, the 2nd Earl of Essex and an intimate favourite with the Queen herself. Young and gallant, the young man embodies a return to chivalric culture. Moreover, as the V&A notes, miniatures such as this represent expressions of amorous dalliance, votive images given by a knight to his lady in pledge of devotion. And the ‘Young Man Among Roses’ is precisely this, a declaration of love.
Another painting of Robert Devereux is at the NPG (attributed to studio of Nicholas Hilliard; watercolour on vellum, circa 1595).

Not quite 10 inches tall, 8 inches wide, we see him posing very seriously and wearing the most intricately patterned armour – as does his horse, with great plumes of feathers – alongside a similarly finely-embroidered tent. Note how tall Devereux is by comparison with the horse handler! The helmet resting on the table is also extraordinary – positively surreal with its ‘blank’ interior. It was probably painted to celebrate Essex’s role in the Accession Day tilt of 1595 and Looking at an enlarged image, it is also possible to make out the tents in the background and two figures sword(?)-fighting in the middle ground. More than ‘simply’ a portrait, this is quite a scene: the setting for a glamorous Elizabethan masculinity.

Jonathan Jones’s article in The Guardian explores the minatures brilliantly: These tiny masterpieces, blazing with passion, desire and mystery, are among the most magical creations in British art. He even suggests that they take on something of an “occult quality” – an intensity of powerful meaning.

There are of course numerous versions of Elizabeth herself, but surely the most intriguing is of her playing the lute (c.1580; Berkeley Castle, Gloucestershire). It’s very fashionable of course, but there’s a light-heartedness, far away from the stereotyped official imagery of later years.
Hilliard also worked beyond Elizabeth’s court and there are portraits of people from outside such elevated circles – “anonymous” now, but fascinating for all that. 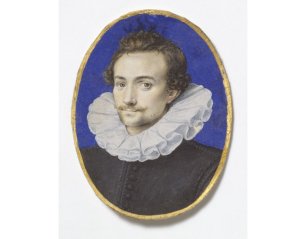 The miniature on the left is of An Unknown Woman from the V&A and a rare example of a portrait of a person from the very different world of the city merchants and their families. With her tall black hat, smocked stomacher and apron, this woman is typical of her class. Her dress is enlivened not by elaborate jewellery but by means of naturalistic touches in the form of roses and other flowers tucked into the corners of her dress…

Hilliard in turn taught the art of miniature painting to Isaac Oliver (1558-1617), whose work is slightly different to his teacher’s. Hilliard – reflecting Elizabeth’s own expectations – always painted his sitter in full light. Oliver however used shading and shadow to shape a more three-dimensional sense of the face  – as can be seen in the portrait of An Unknown Man on the right.

Miniatures such as these, along with larger panel portraits, remained a world away from ‘the common viewer’ out and about in the country where the strictures of Reformation continued. Only perhaps now and then would pictures be seen in the books of travelling storytellers, actors and singers.

There are short essays on the British Library website which give fascinating general perspectives on life in Elizabethan times.

Elizabeth died in 1603, the crown passing to James I. Rothenstein writes that this “caused no sudden break in the artistic tradition of the country”. However, there are changes afoot as we enter the Stuart world, and a new century.

***
To finish: Perhaps the most bizarre as well as mysterious painting of this period is by an unknown artist: The Cholmondeley Ladies [c.1600–10; Tate]

According to the inscription (bottom left), this painting shows ‘Two Ladies of the Cholmondeley Family, Who were born the same day, Married the same day, And brought to Bed [gave birth] the same day’.

If you are enjoying this series and are able – even occasionally – to donate, I am extremely grateful. Many thanks and best wishes!