As John Rothenstein notes in An Introduction to English Painting, Hans Holbein, for all his fame and renown at the court of Henry VIII, never founded a school of art in Britain. Indeed the art of painting fell yet further into disrepute in the common life of England through the reigns of Edward VI, Mary I and Elizabeth I.

Even so, certain aspects of visual culture were actively developed in royal and court circles – principally portraiture (which we’ll look at here) and the art of miniatures, which evolved from the traditions of illumination (next time).

There is a very interesting Wikipedia entry on the broad picture of art in Tudor times
and another looks at Elizabethan portraiture in particular: With the virtual extinction of religious painting at the Reformation, and little interest in classical mythology until the very end of the period, the portrait was the most important form of painting for all the artists of the Tudor court, and the only one to have survived in any numbers. Another great article on Gloriana’s portraits is at artuk.org.

The artists involved here were, for the most part, either invited (by the monarch or an aristocratic patron), or they were fleeing religious persecution, from the continent. In particular Flemish artists were recognised for their technical skills; and many were connected through family and marriage ties. See Karen Hearn’s article on Netherlandish Painters in Britain.

Rothenstein highlights Hans Ewarth, who found exile at the court of Mary Tudor (1553-8) and whilst his patrons were in the main Catholic supporters, he continued to paint under Elizabeth. As the Tate notes: it isn’t difficult to see why he was so favoured – his sitters come across as figures of prestige and authority, probably a more useful record for posterity than mere prettiness. Many may now be forgotten, but their noble features and sumptuous clothing tell us they were people who mattered.

Not that life as an artist was easy; Marc Gheeraerts the Elder and his son Marc Gheerearts the Younger both worked at the Elizabethan court, bringing a range of skills from print-making and architectural design to portraiture.

In this satirical drawing, the Elder artist recognises the insecurity of the artistic life. As discussed in a British Art Studies Article, there is a quotation on the picture:

“With difficulty shall they emerge whose virtues are obstructed by poverty at home”. This alerts us to the proper subject of Gheeraert’s drawing, in which a harassed artist turns from his work—and from Mercury, protector of the arts and financial gain—to attend to his mewling infant, needy wife, and brood of unruly children.

This international network of artists may not be very much of a surprise – after all the art of manuscripts and church wall-paintings had been very much inter-connected all across Europe, moreover, the monarchy itself was very much a transnational affair. It is though perhaps a surprise when, under Elizabeth especially, politics was very much of nationhood and patriotism (it’s really interesting to watch Lucy Worsley’s programme about the propaganda around the Spanish Armada on BBC I-player in this context).

However, despite the lack of  either art schools or much national interest, there must have been some residue of painterly desire and creativity for there were English painters working at the Elizabethan court learning from and working alongside their European counterparts.

Nicholas Hilliard (1547-1619)
is renowned these days especially for his miniatures (as we’ll see next time).

He comes into the community of artists at court by way of his apprenticeship as a goldsmith, when he was taught the art of limning – miniature painting – by Levina Teerlinc, a Flemish Renaissance miniaturist who served as a painter to the English court of Henry VIII, Edward VI, Mary I and Elizabeth I. She was the most important miniaturist at the English court between Hans Holbein the Younger and Nicholas Hilliard.

And Hilliard also painted larger panel portraits of Elizabeth such as:

As research at the National Portrait Gallery suggests, what becomes so important in Elizabethan portraits is not so much the ‘likeness’ but the symbolism; there was a change in the ‘ways of seeing’ of the late Tudors, paintings were ‘read’ for their (often complex) meanings. With regard to The Pelican Portait, NPG notes: The pelican jewel at her breast represents self-sacrifice, as a pelican was said to draw blood from its own breast to feed its young. It alludes to Elizabeth’s role as mother to the nation.

George Gower was an English portrait painter who became Serjeant Painter to Queen Elizabeth I in 1581, and there are examples of his early work, along with research essays at Tate.

Very interestingly, Gower also painted a self-portrait in 1579 showing his coat of arms and his artist’s tools of his trade: An allegorical device shows a balance with an artist’s dividers outweighing the family coat of arms. Karen Hearn is quoted as saying that this is: “a startling claim in England where a painter was still viewed as little more than an artisan. So Gower certainly seems to have had a sense of himself as an artist. The writing at the top right is ‘doggerel’ verse which might suggest something of Gower’s biography:

meaning presumably that he had neglected his talent in early youth. But

– his profession is profitable. It is also honourable: arms display his birth, and

‘what Parents bare by iust renowne, my skill mayntenes [maintains] the prayes [praise]”

With those profitable pensils, Gower became Serjeant Painter to the queen in 1581, and painted her portrait – again, the focus is very much on the symbolism.

Connections between the sieve and virginity are drawn together in the tradition of Tuccia, a Roman Vestal Virgin who proved her purity to her accusers by carrying a sieve of water from the banks of the Tiber to the Temple of Vesta…  The inscription on the rim of the sieve references the second tradition present within the painting, implying that the queen is skilled at separating the “good” from the “bad” as she rules the country, ensuring that it is only the “good” that reaches her people.

Gower is / was also associated with The Armada Portrait (1588; Woburn Abbey): an extraordinary propaganda picture (again, really worth watching Lucy Worsley’s programme): Her hand is firmly on the globe and the Imperial crown reflects her equality with the Holy Roman Emperor and her status as Empress of the world, whilst the mermaid hints at her command of the seas.

Whist we don’t know the route by which George Gower became an artist, we met the father of John Bettes the Younger at the court of Henry VIII (possibly working under Holbein), so this is a father-son apprenticeship it seems.

What is fascinating about this image is how ‘flat’ it is, making it very suitable in terms of an iconography of the queen that could be reproduced as an authorised version (authorised that is by George Gower) to be displayed to the public, for increasingly the image of Elizabeth was rarely taken from life, but repeated from a standardised model. The portrait functions as a regal icon rather than a human likeness. It is intended primarily to convey a sense of courtly magnificence and authority, telling more about the image cultivated around her than about her true physical appearance.

Peake was an apprentice goldsmith, closely associated with Nicholas Hilliard, and entered the Court by way of the ‘entertainment workshop’, that is The Office for Revels, becoming an established and fashionable portrait painter in the 1580s.

He would become serjeant-painter to James I, but with regard to Elizabeth it is 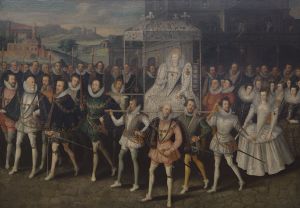 which perhaps sums up what the art of portraiture meant in the late Elizabethan era.

As Roy Strong is quoted: this picture is “one of the great visual mysteries of the Elizabethan age” – portraying her as much younger and more triumphant than she was – “[t]his is Gloriana in her sunset glory, the mistress of the set piece, of the calculated spectacular presentation of herself to her adoring subjects.”

Whilst there was a great flourishing of literature, theatre and music – an English Renaissance – the culture for painting was strictly limited as part and parcel of the Elizabethan propaganda machine. As Rothenstein writes, “similarities of style were encouraged by legislation” – and painters’ workshops or studios seem to have been part of that production: note on artuk.org how many – very similar – portraits of Elizabeth there are and that so many were unsigned and so come under British/English School rather than recognised by individual artists.

Perhaps, however, it is via the miniatures – a more private art form – that we might yield a different view?