As Hogarth brought the streets of London to the canvas, and Wright the ‘romance’ of industry, so other artists were picking up the threads that would lead to landscape painting. In the 18th century though, rather than ‘pure’ landscape painting, this meant turning the portrait-artist’s eye to animals (principally horses), whilst the social commentary of ‘conversation piece’ painting reflected an apparently stable system of rural working life.

I note this here at the beginning because of a painting by Joseph Wright of Derby that might stand in contrast to much of what follows:

Earthstopper on the Banks of the Derwent

The Derby Museum website notes: An earthstopper was a man paid by local huntsmen to block up foxholes, also known as earths, the night before a hunt so that the foxes couldn’t get back in and would more easily be caught.

(which raises the question of what is ‘sport’ in relation of to animals; fox-hunting)

The painting has all the mysterious ‘romance’ of Wright’s art, the moonlight, the lamplight that singles out this solitary man working through the night with his dog and horse for companions. And yet, as we might have noted from Wright’s blacksmith paintings, a certain ‘social realism’ balances the romance: the hard, lonely toil; that, even as the man works in the pay of the landowner, his ragged clothing pronounces poverty.

The difficult lives of workers in rural Georgian England are rarely pictured. Instead, the ‘gentry’ and the new ‘middling sorts’ who commissioned art for their country houses wanted subjects that announced and celebrated their status. 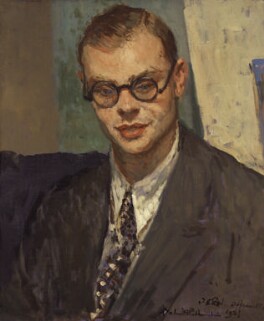 As with portraiture and decorative painting, the development of art in England is interwoven with the art and artists of continental Europe. Rothenstein notes Jan Wyck (1640-1700), a Dutch-born artist who migrated with his father (also an artist) to England and developed a highly successful career as a painter of portraits as well as battle and naval scenes. One of his students was John Wootton (1686-1764) of Warwickshire who would use his training in the depiction of the battlefield as the basis to become, as Rothenstein says, “the first horse-painter of his day”. As his pictures of the hunt might well resemble battlefield scenes to an extent; many are ‘portraits’ of horses, many of which ran at Newmarket (where there had been horse-racing since the 12th century).

A Grey Horse and Jockey in Red Colours, before a Stable [1715; National Trust, Clandon Park; artuk.org]

“We now have to consider one who stands head and shoulders above the other sporting artists of the English School, George Stubbs [1724 – 1806]. He ranks among the greatest animal painters of the world and as a portrayer of horses he has never been excelled and seldom rivalled” – enthuses Rothenstein:

“He was the first European artist to paint animals as they are”. 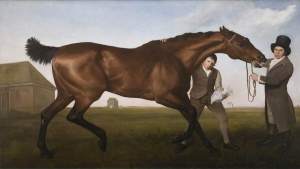 And what is especially significant about Stubbs’s work is that it is based not only on the visual appearance of the horse, but the underlying anatomy. A self-taught artist, he moved from his home in Liverpool to work as a portrait painter in York whilst studying human anatomy and, after an unfulfilling trip to Rome:

In 1756 he rented a farmhouse in the village of Horkstow, Lincolnshire, and spent 18 months dissecting horses, assisted by his common-law wife, Mary Spencer.

“The Anatomy of the Horse” was published in 1766 (many of the original drawings can be seen on the Royal Academy website), and it was this scientific research and knowledge that led to aristocratic patronage and numerous paintings, the most famous of which is no doubt “Whistlejacket” at the National Gallery. Looking through the artuk.org website, it is fascinating to see the range of Stubbs’s work – from the ‘horse-portrait’ to paintings of dogs and wild beats, and he does something more, too: 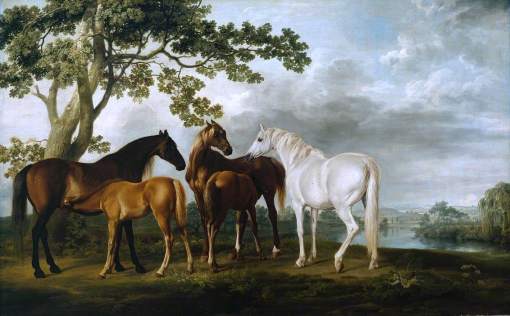 Mares and Foals in a River Landscape [1763-8; Tate Britain; artuk.org]

The painting is carefully composed. As Tate notes, it exemplifies the artist’s sense of pattern and rhythm:

Mares and Foals in a River Landscape utilises a classical composition which gives an overall symmetry and balance to the group, in which the three mares and their foals are placed so as roughly to form a cone, with their rumps marking the perimeter and their heads the apex. The feeding foals are essential to the composition, allowing the spectator’s eye to be drawn over the whole group in a slow revolving rhythm.

What it also does though is set the horses by themselves – although they are owned, groomed and ‘in service’ as it were – they are shown interacting within their own ‘society’; they have their own relationships with each other. 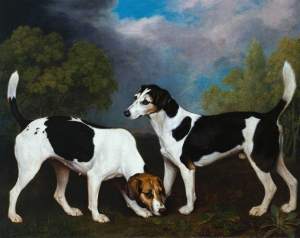 And I can’t resist including these two dogs; their personalities are palpable as is their relationship with us as they gaze out quizzically, uncertainly wondering what we’re looking at!

Two other artists mentioned by Rothenstein are Benjamin Marshall (1767-1835) and James Ward (1769-1859) – contemporaries, but with very contrasting styles.

To look through Marshall’s work at artuk.org, we can see his painting is very much in the style of Stubbs, though as Rothenstein notes, there is a real severity with “every visible muscle, artery and tendon starkly emphasised”. Yet many of his paintings also remind me of Hogarth as Marshall catches the sociable atmosphere. 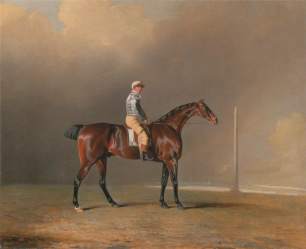 John Hilton, Judge of the Course at Newmarket; John Fuller, Clerk of the Course; and John Stevens, a Trainer [1804; Yale Center for British Art; artuk.org]

By contrast “Ward’s painting is turbulent. Instead of the severe calm which prevails in Marshall’s paintings, the weather of Ward’s is stormy… [for] he looked to Rubens for inspiration. 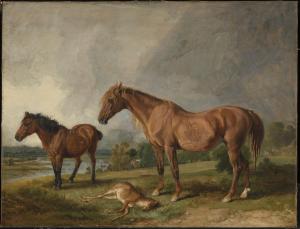 Portraits of Blackthorn, a Broodmare, with Old Jack, a Favourite Pony, the Property of E. Mundy, Esq. [1812; Tate]

…commissioned by Edward Miller Mundy of Shipley Hall, Derbyshire. It portrays particular animals he owned – Old Jack, a bay pony, standing on the left, and Blackthorn, a chestnut mare, with a tiny new-born foal on the grass in front of her.

Greatly influenced by Rubens, [Ward] seems in his turn to have been a model for Landseer in the manner in which he endowed animals with human emotions.

Rothenstein agrees with the Tate in regard to Ward’s influence on Edwin Landseer (1802-1873), saying “Landseer created whole mythology of animal experience. His dogs registered the sublimest emotions; his stags were the personifications of nobility and heroism.” 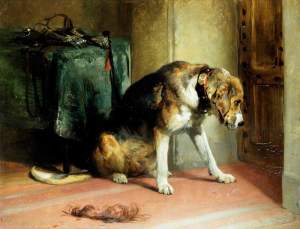 Landseer’s art might not be everyone’s cup of tea; it reflects the high emotional tone of Victorian art and deep sentimentality, and certainly seems a long way from the Georgian artists of the previous century. Rothenstein is particularly dismissive: Landseer’s appeal perhaps escapes us now… [it all seems] rather facile.”

The chapter on “Sporting and Animal Painting” skips quite a long way (and there is more to be said when we discuss landscape art). Next time though we’ll return to Portraiture through the work of Joshua Reynolds.

However, just to return to the introduction and the recognition that the countryside was a very different place depending on whether you were an earthstopper or a landowner, some of James Ward’s paintings interestingly depict the less decorative ‘working’ side of rural life. 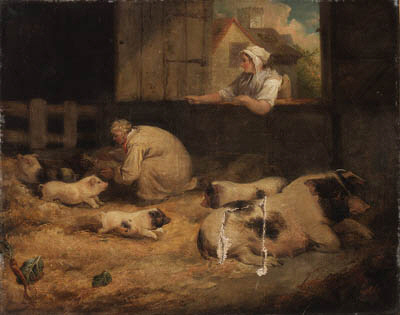 Tending the Piglets [no date; Christie’s]