Rambling with Rothenstein (20): Joseph Wright of Derby – a visual alchemy

In “An Introduction to English Painting”, John Rothenstein gives only one paragraph to Joseph Wright of Derby (1734-1797) despite marking his equivalent importance to William Hogarth in terms of creating a new and original genre of art in a quite alternative setting: working outside of London, reflecting the growth of industrial culture, finding patrons among manufacturers and the scientific community, and developing “the fullest expression of the romance of the early years of the Industrial Revolution.”

And yet, it seems to me, there is an extremely important difference between the paintings of Hogarth and Wright even beyond these circumstances.

Hogarth’s art, as we have seen, is primarily ‘narrative’, a visual story-telling through a series of developing scenes – akin to book illustration and theatre performance. His subject is the drama of everyday life; a contemporary ‘staging’ that often invites the viewer to enjoy and to think-through ideas of personal morality and social in/justice.

Wright’s paintings also focus the drama of contemporary life, only they record very different aspects of Georgian Britain: scientific research, learning and industry. One of his most famous paintings along these lines is “An Experiment on a Bird in the Air Pump” [1768, The National Gallery], but if we look at An Iron Forge, interesting ideas come to light…

“An Iron Forge” is one of five ‘night pieces’ which Wright made between 1771 and 1773, taking as his subject the blacksmiths’ shops and forges of Derbyshire. In this scene of a small iron forge at work, an iron-founder and his family are bathed in the warm light cast by a newly forged white-hot iron bar, which has been dragged out of the nearby furnace by an assistant. Wright adapted the scale for dramatic effect, compressing the scene to accommodate the machinery and the figures.

The painting is not ‘simply’ a record of life in the forge, however. As the Tate notes:

the modernity of the painting lies in its heroic treatment of a theme from common life. According to the high-minded art theories of the period, such a prosaic scene of ordinary working men did not warrant such a dignified treatment. 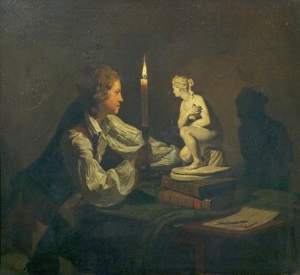 A Boy Admiring a Statuette by Candlelight

[1760, by a follower of Wright; Derby Museum and Art Gallery; artuk.org]

Like Hogarth, Wright is encouraging the viewer to think about the changes and ethics of modern life, only he doesn’t do so by ‘story-telling’ as such – he calls upon us to look hard and think visually (like a scientist) not only in terms of the subject, but its presentation in the use of light, for example… 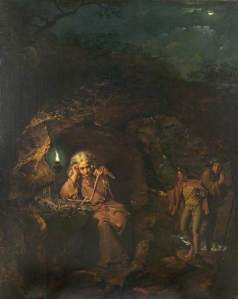 A Philosopher by Lamplight (or a hermit)

Many of Wright’s paintings use the drama of chiaroscuro – the sharp, dramatic contrasts of light and dark (inspired by Caravaggio and his followers) – created by candlelight or moonlight, or as in the forge the fire of heated metal, at the heart of a darkened room or at night.

Symbolically this is the light of enlightenment; the Age of Reason, knowledge emerging from ignorance – and Wright himself was deeply involved with the development of new ideas and understandings by way of, for example, the Lunar Society in Birmingham and friendships, as one can see from his portraiture, with people such as

Erasmus Darwin was an English physician. One of the key thinkers of the Midlands Enlightenment, he was also a natural philosopher, physiologist, slave-trade abolitionist, inventor and poet.

And if we look at the Forge painting again, there is something more…

The extraordinary light effects and dramatic composition endow the scene with an almost religious grandeur (Tate) – broadly there is a sense of Christ’s nativity, in particular note the ‘mother and child’ – and it’s that religious element that seems to me so very important.

The Tate comments: The different ages of the iron-worker’s family update the old theme of the ‘ages of man’. The presence of his wife and children associate his work with domestic happiness and prosperity.

And elsewhere there is the discussion that, in combining this religious echo with contemporary industry, Wright is recording debates and unease on the relationship between faith and science.

But it is the way he does this that intrigues me, for Wright inspires our thinking about the social meaning of the picture not through Hogarthian narrative and story-telling progression but by purely visual means: that is, through the encounter of a modern, realist depiction with markers traditionally associated with biblical paintings. It’s this interaction of these two visual streams that stimulates our thinking beyond the picture frame. We don’t need narrative here, but we do need a knowledge of painting to create the reaction.

The Alchymist, in Search of the Philosopher’s Stone, discovers Phosphorus, and prays for the successful conclusion of his operation, as was the custom of the ancient chymical astrologers [exhibited 1771, reworked and dated 1795; Derby Museum]

Wright is such an interesting artist, expanding the world of English painting and ways of seeing. Moreover,  he is also important in terms of the developing art of landscape painting in Britain: 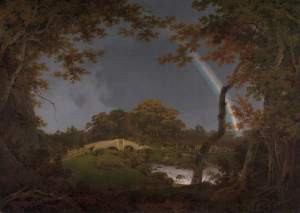 Landscape with a Rainbow [1794; Yale Center for British Art; artuk.org]

as we’ll see soon. But first, we must follow Rothenstein’s lead for, at the same time as Wright and Hogarth, “there grew up another popular art, namely, sporting and animal painting” – which leads us to the art of George Stubbs.