Rambling with Rothenstein (8): from Doom to Cloth of Gold

John Rothenstein notes that when we get to the 15th century, there were far fewer schemes of decoration…

“The country had by no means recovered from the ruin wrought by the Plague, in addition to perpetual foreign war; and it now had to undergo five decades of bitter dynastic struggle. The Wars of the Roses completed what the Black Death had begun.”

That is: the patronage and commissioning of art had collapsed.

Church wall-painting continued, yet not in terms of great decoration or even high quality work. Instead, there were individual “popular moralities” painted on the walls (which range from the unnerving to the gruesome!).

The most visible impact of changing imagery was how reminders of Death, Judgement and the Afterlife were portrayed.

Instead of a glorious Christ in Majesty, we see The Doom, and the inevitability of death and judgment.

Although there are many different versions, the composition stays broadly the same. On the left side of a Doom painting (that is, on Christ’s right hand) is Heaven, whilst on the right (Christ’s left) is Hell. At the top of the image Jesus Christ sits in glory with his right hand encouraging the saved upward, and his left hand pointing down to Hell for the damned. 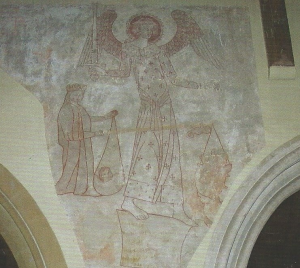 Alternatively, we might see St Michael Weighing Souls as at All Saints Church, Catherington, Hampshire.

Such seems to have been the grim lot for people up and down the land in parish churches. For royalty and aristocracy of course, the brilliance of decorative colour and all that it represented continued; it could be brought ‘home’ into palaces and chapels via tapestries and jewels, illuminated manuscripts and painted miniatures.

And, as kingship is interwoven with religion and God, so we might see the balance begin to shift as art, paintings, colour and brilliance became signs of status and wealth; became political.

Roy Strong notes that art was increasingly used as the presentation of royal magnificence:

“palaces, gardens, gold and silver plate, tapestries and jewels, indeed every kind of art, not to mention entertainments and festivals, literature, both prose and poetry, as well as music, both secular and ecclesiastical”

And a huge influence on the English Court was the kingdom of Burgundy (Netherlands, Belgium and part of France) where a “dazzling splendour” set dukes apart from everyday people. Edward IV (ruled 1461-1483) was indeed bedazzled; he would set the style for the Tudors to come.

An image of Edward IV enthroned from Jean de Wavrin’s chronicle of English history at the British Library reveals both the sumptuousness of Edward’s clothes and also his tapestried surroundings. 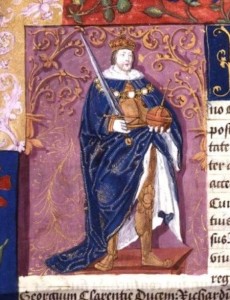 Edward’s reign began in bloodshed and civil war,
but Edward was more than that; he was also a patron of the arts who was interested in history and literature, commissioning beautifully illuminated manuscripts from the best artists in Bruges, while also supporting William Caxton in his efforts at developing the printed book in England.

Presentation miniature from Dictes and Sayings of the Philosophers, the first printed book in the English language, translated by en:Anthony Woodville, 2nd Earl Rivers and printed by William Caxton.

What is particularly fascinating, it seems to me, about this image – along with that of Jean de Wavrin’s above – is that whilst it replicates the example of Aethelstan presenting Bede’s book to St Cuthbert (Rambling No. 6), making real the power and authority of books themselves, the book being presented to Edward here is a book of philosophy (rather than one of a religious Life or an historical Chronicle written by a monk).

This is a picture that, in all its colour, geometric pattern and textural detail, records the beginnings of a ‘new age’ of scholasticism as translations of humanist texts originating from the Greeks and Romans – sciences, mathematics, astronomies and botanies – are crossing into Europe (and England) from the Middle East.

Not only is it important that Caxton would bring printing to England, but that this first book is a translation, not into Latin or French, but English. Two great cultural changes of course. But how about this picture? Visual art, painting, is used here for an image that doesn’t present saints, Biblical stories or moralities, but a contemporary cultural event (albeit in the context of power and kingship).

That was 1477. By 1485, Henry VII – the first Tudor – had taken the throne by force and needing to impress his establishment as king nationally and internationally, also applied the power of art through colour and symbol:

The illuminated initial ‘T’ encapsulates the royal coat of arms, with the crown placed atop. This regal symbol is supported by two heraldic images which Henry VII established early on during his reign: the red Cadwaladr dragon, a symbol of his descent from the believed-to-be last king of Briton, named Cadwaladr; and the white Beaufort greyhound, which linked him to the house of Beaufort and his Lancastrian ancestors from whom he was descended through his mother, Margaret Beaufort. Further Tudor royal iconography adorned the border. We yet again see the Beaufort portcullis ornamenting the frame around the text, as well as the red Lancastrian rose that prominently stands out from the smaller surrounding flowers. These images signify the Tudors’ genealogical claims to the English throne and Henry VII’s royal identity.

But there’s another aspect to Henry VII’s ‘art of power’ too – portraiture.

There’s an extraordinary painting in the Royal Collection “The Family of Henry VII with St George and the Dragon” c. 1503-9

In a landscape with two fantastic buildings St George attacks the dragon before Princess Cleodolinde; in the foreground are two tents with angels holding open the flaps to reveal Henry VII and Elizabeth of York kneeling with their children.

It was commissioned by Henry probably as an altarpiece, but it is symbolic of the new Tudor dynasty rather than offering anything like realistic portraits.

However, there are fascinating researches c/o the National Portrait Gallery website, and one is particularly relevant to our rambling within the sphere of painting in England, as Frederick Hepburn, Independent Scholar discusses:

a miniature scene painted in a manuscript (BL Arundel MS 66, fol. 201). The scene shows the book being presented to Henry VII, whose face is recognizably a portrait likeness. The manuscript, made almost certainly in London, is dated 30 June 1490, and this shows that at around that time an artist who was capable of producing portrait likenesses was working within the orbit of the English court.

which is very intriguing indeed!

It was Henry VIII of course who would take the power of the visual to ever greater heights, in particular through portraiture and his self-image, as we’ll see.

Let us end here though with a painting that shows an extraordinary pageant of early 16th-century Tudor colour and finery:

The Field of the Cloth of Gold, from the Royal Collection Trust:

The meeting between Henry VIII and Francis I, known as the Field of the Cloth of Gold, took place between 7 to 24 June 1520 in a valley subsequently called the Val d’Or, near Guisnes to the south of Calais. The event derived its name from the sumptuousness of the materials used for the tents, pavilions and other furnishings. It was a spectacle of the greatest magnificence and the several artists responsible for this painting [made later, circa 1545] have made a fairly accurate visual summary of the various festivities that took place during the meeting of the two kings.

There were banquets and tournaments, archery displays and musical entertainments. And, in the temporary palace made for the kings’ meetings, there were:

images resembling men of warre redie to cast great stones: also the same gate or Tower was set with compassed images of ancient Princes, as Hercules, Alexander and other, by entrayled worke, richly limned with gold and Albyn [Albion?] colours (from Grafton’s Chronicle).

The art and colour of power!