A History of Art in England (7): The Palace of Westminster

Whilst Henry III may have concentrated on the enormous Abbey project, John Rothenstein notes in An Introduction to English Painting, the King’s artistic influence elsewhere too:
“At the Palace of Westminster, under the King’s direction, a series of magnificent paintings were carried out on the walls of the Queen’s Chamber, the Antioch Chamber and in the Great Chamber of the King, sometimes called the Painted Chamber.”

The Painted Chamber, along with much of the rest of the building, was destroyed by fire. It had been more than 80ft long, 26ft wide and 31ft high and, as www.parliament.uk notes:

The room was as grand and as colourful as the King and his craftsmen could make it. It was long and narrow, and housed a canopied state bed at one end.

It also served as a reception room, and was chiefly remarkable for the magnificent paintings that covered its walls. The King’s craftsmen began work on the paintings in 1226 and continued for nearly sixty years.

King Henry lay in the splendid state bed which stood against the wall, its posts painted green with gold stars, and he apparently complained about the draughts. Above his bed was a large painting of Edward the Confessor, to whom he was particularly devoted.

In 1799, the artist William Capon discovered, underneath a layer of limewash and tapestries depicting the Trojan war, that (as Patrick Cormack describes):

The side walls were divided into tiers and painted with scenes of bloodshed, martyrdom, warfare and destruction… [there was] a huge painting of the Coronation of Edward the Confessor. Angels were everywhere and there was a series of 7ft. high virtues triumphing over vice [and] dramatic Old Testament scenes.” 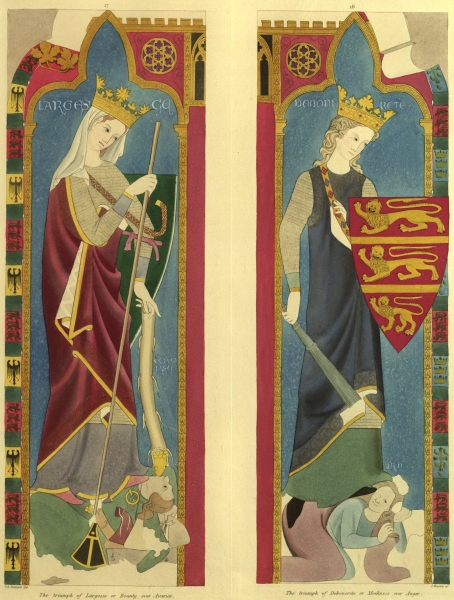 There are a number of watercolour copies made in the early 19th century by the antiquarian Charles Stothard of wall paintings in the Painted Chamber, Westminster Palace. This paintings depicts the triumph of Bounty over Avarice and Meekness over Anger [1835; Digitised page, Vetusta Monumenta, Vol VI, University of Missouri]

Then in the 1920s, Professor Ernest Tristram ‘reconstructed’ further images including:

It seems the Old Bible stories might also form a commentary on the contemporary politics of the day – namely the crusades and Europe’s belief in its rights over the Holy Land [for a long read see Reeve]. Art here then was becoming ‘political’ – the presentation of power at the heart of the palace, to be seen, recognised and acknowledged as a reflection of the King himself.

In this weekend’s Saturday Guardian, there’s a fascinating article by Esther Audley on research by Eleri Lynn (Historic Royal Palaces) noting that Henry VIII and Elizabeth I both enjoyed solitude and contemplation and “drew comfort from confined, private spaces”. Whilst the Painted Chamber was hardly small or essentially private, I do wonder whether Lynn’s recognition that “the more private the room, the more expensive the adornments” rings true even back in Henry III’s day?

After all, the Chamber was his bedroom!

A conjectural restoration of Westminster Palace…  with St Stephen’s Chapel at its centre.

Rothenstein tells us that
“…in addition to the ambitious decorations in the Painted Chamber, an elaborate series of paintings was carried out between 1350 and about 1363 in St. Stephen’s Chapel.”
which the Parliament website describes as:
Richly (and expensively) decorated, the roof of the Upper Chapel was painted sky-blue and spattered with thousands of gold stars, and below its windows were many painted biblical characters and stories. 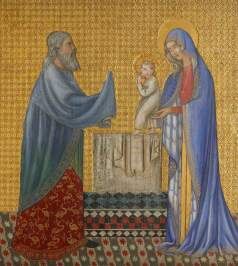 As Rothenstein notes, these decorations were rediscovered in 1800 only to be destroyed by the 1834 fire. However, much work has been done by the University of York and we can now visit a three-dimensional virtual St Stephens – which is fascinating: how Rothenstein would have loved this! 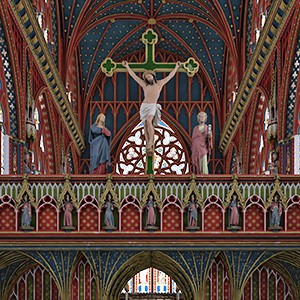 This “exquisite and lyrical flowering” of art at Westminster was influenced by the Gothic and interconnected with painting and decoration across Europe.

Roy Strong [in The Spirit of Britain p.66], writes:

“A great church was the most magnificent building medieval people ever entered. Cathedrals were conceived as symbols not only of the whole Church of Christendom, but of the Heavenly Church too”

Hence the extraorinary will to create light and colour throughout Westminster Abbey and St Stephen’s Chapel – opulent and visionary places somewhere between Heaven and Earth.

In complete contrast to such a huge, physical ‘installations’, Rothenstein also mentions a small and portable artwork from the end of the 14th century:

The Wilton Diptych, now in the National Gallery which was painted for Richard II’s private use; artist unknown.
The diptych was painted for King Richard II of England, who is depicted kneeling before the Virgin and Child in what is known as a donor portrait. He is presented to them by (right to left) his patron saint, John the Baptist, and by the English saints King Edward the Confessor and King Edmund the Martyr.

*
Royal Westminster had the money to bring huge resources to bear on these works, with hundreds of artists, craftspeople, carpenters, stonemasons and glaziers working with the uppermost skills to be found across Europe. For further reading, there is a brilliant and intriguing account of the Cosmati Pavement in Westminster Abbey.

A History of Art in England (7)

If you are enjoying these little articles and are able even occasionally do ‘donate’ I am extremely grateful. Many thanks and best wishes!