There is a thrill and a challenge in viewing the current Essex Open exhibition.

The thrill is that of variety, for there is no single subject theme or painting style taken up by the artists of Essex; nor – although the exhibition consists primarily of oil paintings – one medium, for there are watercolours, prints, photographs and sculptures. The challenge, then, is for the viewer: how to take on board the diversity before us as each artefact demands we look at it differently to the previous one. By the time we have reach the end of such an extensive show – divided across two floors of The Beecroft Gallery – we are exhausted, having worked our way through so many ways of seeing and responses. Looking back at the experience, certain elements rise to the surface of course; but, truly, one should return to look again and again.

(nb: images were photographed by me and are only details of the complete artworks)

So how should we approach this exhibition? Perhaps that geographical “Essex” might be the key, for certainly many of the pictures reflect local life and everyday scenes. “Sunlit Dinghies” by Anita Pickles is an image we all recognise immediately: it could be anywhere along the coast of Essex, the tide out, the scene a snapshot as we walk along the beach on a sunny afternoon; the scent of sea air palpable. Come into town, and Malcolm Perry’s “View from Chester Wall” is again so recognisable and, despite presenting a particular place, stands for so many of our towns and streets: the bustle of Saturday afternoon shopping; the architecture of historical Essex. As with Pickles’ work, it is a view that captures both an immediately present-day scene, yet one that has been this way forever, and so stirring personal and shared memories. 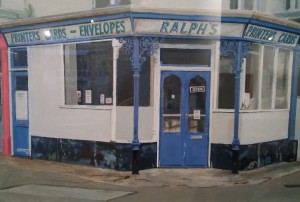 “Ralph’s – Corner of Park and Hamlet” by Stephen Gibbs

And I couldn’t resist “Ralph’s – Corner of Park and Hamlet” by Stephen Gibbs. Again it brilliantly captures an immediately recognisable scene, a somewhat dilapidated shop on a street corner that we probably pass every single day never thinking it should be elevated to ‘art’. It resonates with familiarity, as if it couldn’t be of anywhere else but Westcliff; and it stands for something – all those independent shops and businesses that cluster around Hamlet Court Road, ramshackle yes, barely surviving probably, yet remaining stubbornly “open”.

Whilst Gibbs’s picture can be framed within a ‘local’ ‘Essex’ theme, we might also recognise it within the broader contexts of art history – paintings of shopfronts by both Whistler and Sickert come to mind. Indeed a number of works in this current exhibition echo other – more famous – artists and pictures. “Turbulent Sky over Fen Bridge” by Paul Franks cannot but recall Constable in those looming, darkening clouds and gorgeously rich colours as the light picks out the bridge among the trees. It is – almost essentially – East Anglian. Then, alongside, is Liz Hine’s “Picardy Flowers” which makes us long for summer, to lie down in a field and gaze up into a blue, blue sky.

A more playful echoing is “Costa” by Alan Woods which transports Manet’s “A Bar at the Folies-Bergere” to a coffee shop in… Southend High Street? Well, it could be anywhere really. That’s perhaps the irony; the Folies-Bergere being so singularly unique; Costa so ubiquitous. Should we understand this young woman behind the counter as an icon of our times? We bestow a Romantic gaze upon Manet’s painting – imagining the bars of 19th-century Montmartre with a bohemian delight that a Costa coffee-shop could never inspire. Yet the Impressionists sought to portray ‘modern life’ – look at Manet’s barmaid again, for those bars and cafes weren’t such glamorous places at all, indeed they could be rough and threatening – she doesn’t look happy. The refrain on Gibbs’s picture reads “Are you alright my love?” which might be what the barista is asking us, but perhaps it’s what we should be asking her.

“Promenade” by William Barr & “Stand Up” by Adam Smith

A very different sort of play is afoot in William Barr’s “Promenade” as it toys with our senses: how can we look at it in a way that makes sense? Look ‘straight on’ and it seems to be an abstract ‘face’ (is it a dog, even?), the eye reflecting sea and sky; the yellow, then, might refer to a beach. Re-focus and the picture turns into a map, or an aerial view of the shoreline. Perhaps. It is brilliantly defiant. A description that might also encompass some of the sculptures in the exhibition. Adam Smith’s “Stand Up” consists of four standing panels, each collaged with images, colour and graffiti-like painting. Abstract, decorative and mesmerising, it defies categorisation, rejects labelling and refuses any translation into descriptive words: it is, for me, one of the most exciting exhibits on show.

Depictions of local sights and scenes, echoes and allusions to a broader art history, the experience of pure aesthetic sensation… there is one painting that, for me personally, brings each of these elements together: “On-the-Wall Revisited VI” by Steve Whittle. It’s subject is the Chapel of St Peter-on-the-Wall in Bradwell-on-Sea which has been standing against sea and sky for centuries, a place of pilgrimage, peace and spirituality set in contrast to wild nature at the edge of land and sea. Whittle captures the awe of this monumentality within the thrilling drama of art-making itself as we witness the dripping, layering, blending and scratching of colour in his portrayals of grasses and flowers.

So many other paintings should be mentioned, but the exhibition runs until 16th February – and it’s well worth a visit!