Notes that spring from

The Flying Pig: An Introduction to Surrealism

As the visitor moves upstairs, a very different aesthetic to that of Bloomsbury’s Vanessa Bell and Duncan Grant (see Note 1) takes over: the Mae West Lips Sofa by Edward James & Salvador Dali (1938) leads us into the world of Surrealism…

Upstairs, there is a corner of Surrealist Delight – a display that brings as much intrigued joy to the eye and the heart as Michel Remy’s complementary talk The Flying Pig did.

British Surrealism is so often forgotten under the great weight of its continental (indeed global) compatriots; yet from the mid-1930s through to the mid-1940s it was an incredibly powerful force in British Art History as Remy’s book “Surrealism in Britain” (Lund Humphries, 1999) establishes.

One of the first artists to join the London Surrealist Group after the 1936 International Surrealist Exhibition was John Banting – now an almost unknown figure, yet there is an extensive archive of his work at Tate Britain, and his paintings regularly come up for sale through the auction houses. The 1930s were probably the decade for John Banting – he was known as much for partying in Bohemia as he was for his radical-Left political stance; both aspects combining in paintings that can be searingly satirical of bourgeois mores on the one hand, or joyous representations of musicians, music and the Jazz that he adored.

The painting on display at Two Temple Place is a late one, from 1954 (in the Jerwood Gallery Collection): One Man Band 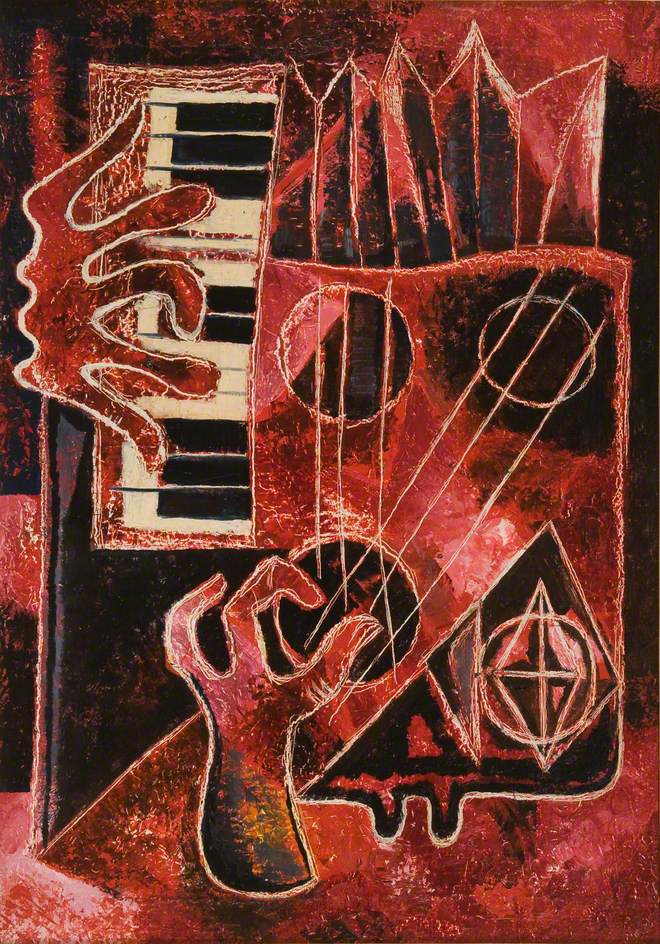 Indeed, it might be seen as one of a serial project that reaches back two decades: the fusion of the musician’s body (hands) with the instrument (keyboard and strings) suggesting a metamorphosis through the rhythms and sounds of the music; indeed the very texture of the painting – colours layered, stippled and scratched – suggests the texture of the Jazz: bold, vibrant and powerful in dominant black and red.

The exhibition also includes John Banting’s “Accordion” (1962) from the Farley’s House Archive, which had been given as a Christmas gift to Roland Penrose.

Edith Rimmington, another extraordinary artist is also recognised here by way of a collection of ‘seaside photographs’ – brilliant images that reflect the strangeness of the natural/ everyday world. These are all from a private collection and so – as far as I can tell – not published anywhere. However, there is a remarkable quote that can only inspire the creative imagination: it is from a letter Edith Rimmington sent to John Banting in 1971, where she describes the sea as “a vast water-brain” of secret knowledges.