“In & Around Cookham – The Art of Stanley Spencer” – notes & resources

Art History Mornings at The Beecroft (Saturday 29th February, 10.30am)

In & Around Cookham: The Art of Stanley Spencer

Stanley Spencer was perhaps one of the most unique artists working in Britain in the early 20th century, his beloved village of Cookham augmented with biblical visions. Today we’ll discuss his remarkable work and eccentric life in the context of the post-war 1920s and the art of his peers.

http://www.artuk.org – and search Stanley Spencer (nb. really useful to chance ‘sort by’ to “old to new” to get them in date order

There are some clips on BBC i-player:

(sadly a 2 part film on Spencer and the Arena: Stanley Spencer and his Daughters are currently unavailable) 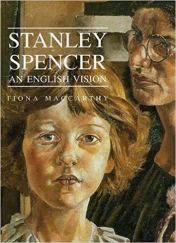 Another Christian artist of the time: David Jones (1895–1974) – who lived in an artistic colony with Eric Gill for a while

Please let me know of other resources you find interesting!