The joy of the Words & Pictures book club (held monthly at The Gleneagles tea rooms in Southend-on-Sea), is that not only do we have the joy of reading and discussing a good book, but that our readings lead to looking at paintings by artists we might not otherwise have come across.

Sophia Tobin’s starting point for The Widow’s Confession was William Powell Frith (1819-1909)’s famous “Ramsgate Sands (Life at the Seaside)”, itself inspired by his family holiday at Ramsgate in 1851 – the year in which the novel is set.

The painting was bought by Queen Victoria and remains in the Royal Collection (@RCT): https://www.rct.uk/collection/405068/ramsgate-sands-life-at-the-seaside; and there is another version at the Russell-Cotes Gallery (@Russell_Cotes): “Life at the Seaside” [1905; c/o artuk.org]

A painting so full of Dickensian characters and possible stories: who are these people, what are they doing there with their parasols and dining-room chairs (and so many clothes!)? It’s very much a portrait of Victorian society: with the steam train and the increasing network of railways, travel was possible and resorts all along the coasts opened up.

I found two paintings by Arthur Boyd Houghton (1836-1895) that further illustrate the scene:

From donkey-riding and sandcastle-building, to reading and painting en plein air. 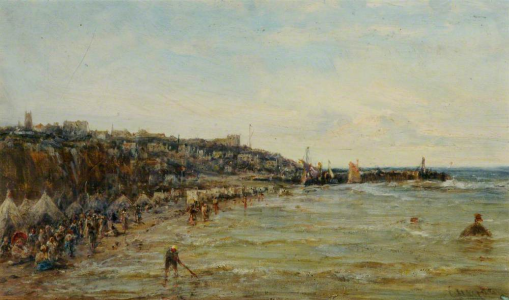 It may have been that Delphine (the ‘widow’ of The Widow’s Confession) and her sister have moved down to Broadstairs to escape a London packed with visitors to the Great Exhibition, but Sophia Tobin escorts them not to the pleasure beach, but rather into a Gothic tale of secrets and dead bodies (murdered?). And where better with its local folktales, windswept ruins, strange shell-decorated grottoes and of course the constant dangers of the sea and shipwrecks; this is the other side of ‘life at the seaside’, one engulfed by fogs and battered by storms.

Again, a number of paintings might be found to illustrate the atmospheres that Tobin creates in words.

Theodor Alexander Weber (1838–1907) A Wreck on the English South Coast, with a Boat Going Out to Rescue Survivors [no date; Warrington Museum & Art Gallery] 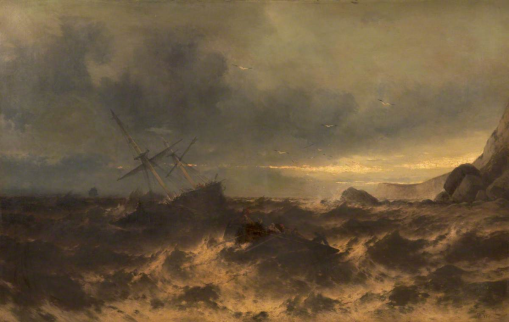 The dangers of life on the coast, the bravery of people like Solomon Holbourn – a character in the novel, and one of the men involved in the real-life rescue of the Mary White – can, as in Turner’s painting here, only leave a residue of fear and a sense of haunting.

Folktales, superstitions and religious beliefs are all intricate to the life of Broadstairs, although another ‘story’ is beginning to appear: the characters’ trip to collect shells on the beach could well suggest another painting, William Dyce (1806–1864)’s “Pegwell Bay, Kent – a Recollection of October 5th, 1858” in the Tate.

Shells and cliffs, fossils and geology; scientific discoveries – along with the industrial revolution – were beginning to change ways of thinking. 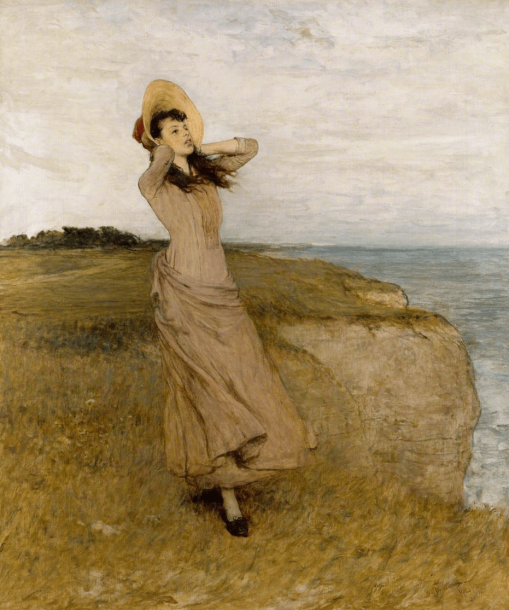 William Quiller Orchardson (1832–1910)’s painting “On the North Foreland” [1890; Royal Academy] could be read in two ways: a young woman breathing in the freedoms of the open air, looking out expectedly to the new future or, on the contrary, a young woman in despair and ruin as she heads towards the edge of the cliffs.

Throughout the novel the constraints of Victorian femininity and womanly behaviour are central, always precarious, threatened and threatening. This is as true for Delphine as for the other women; their secrets are dangerous, deep and longstanding.

Delphine is however an artist; she sketches early mornings on the beach – bravely alone in her painting dress; a daring ‘lady amateur’ (although the acknowledged ‘professional’ painter Mr Benedict gives her greater credit. Mr Benedict’s character is loosely connected to Frith himself, with a dash of Rossetti perhaps, for there is a quiet acknowledgment of the Pre-Raphaelite Brotherhood). And whilst Delphine’s sketches are far from central to the plot, it does make one wonder about all the ‘amateur artists’ of the 19th century (and, indeed, before).

Where are their sketchbooks now?

There must be attics and cupboards full of them somewhere!

And so, whilst Sophia Tobin reveals all her characters’ secrets, ties up the loose ends and illuminates the murderer; she leaves us with an even greater mystery!

“The Widow’s Confession” by Sophia Tobin is published by Simon & Schuster (2015).